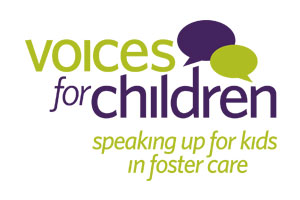 When a child is rescued from abuse or neglect it’s a great thing. But then what? Who speaks for the child after the headlines? In St. Louis, that someone is Voices for Children. For 38 years, only Voices for Children and our volunteers have stepped up, representing children’s best interests in court and in the community.

“We are so fortunate to have the Berges Family Foundation support! With their investment, we’ve added new staff, but more importantly, we have already added almost 60 new children to our program.” Steve Moergen, Executive Director

Voices for Children is a non-profit organization that advocates for children in the St. Louis foster care program. This story is an example of how our case supervisors are able to help these children thanks to our volunteers and generous donations and grants from donors like the Berges Family Foundation.

Justin, now 7 years old, came into foster care because his mother went into the hospital seeking help for homicidal ideations and psychiatric care. She was overheard stating inappropriate things about harming others to her children. When she was admitted, Justin and his siblings were partially dressed in soiled clothing and were not wearing any shoes. Justin’s mother was assessed by the hospital’s behavioral mental health staff and it was determined that the children would be at risk of harm if they remained in her custody.

Justin’s mother has a history of mental illness and was on record with the St. Louis Children’s Division dating back to 2009. She is the mother of seven children, three of whom are in protective custody. Justin’s father has not been an active parent since Justin entered foster care.

Once Justin had been in foster care for a while, our Voices for Children case advocacy supervisor called his school to receive an update regarding his academics. In addition to providing that information, the school counselor expressed that there were concerns regarding Justin’s hygiene and appearance. She reported that Justin came to school smelling of cat litter/urine, wearing shoes that were too small, and that his appearance was not maintained. She stated that Justin was so uncomfortable wearing the shoes that another staff member immediately went out and purchased a new pair for him.

The school counselor called the foster parents to discuss the school’s concerns. Their response was that it had been chaotic around the house. Our Voices for Children case advocacy supervisor was concerned about the incident and the foster parents’ response and decided to report these concerns to the Children’s Division.

The Children’s Division worker assigned to his case stated that they did not have any concerns with the foster home, they had worked with them before and would be surprised if the allegations that the school reported were true. Our case advocacy supervisor was advised to wait and see what the Children’s Division investigator would conclude. They later determined the claims were unsubstantiated.

Our Voices for Children case advocacy supervisor spoke with Justin’s Deputy Juvenile Officer and Guardian ad Litem, an attorney, about the allegations and the placement concerns. Fortunately, Justin’s next court hearing was around this time and during the proceeding, advocated for Justin to be removed from this foster home. The Guardian ad Litem was in agreement with this plan saying that she had serious concerns about his safety. She also expressed gratitude for Voices’ involvement on this case noting that without our advocacy, she would not be aware of this unacceptable situation. Based on the evidence presented during this hearing, the Judge ruled that Justin would be removed from his foster home.

Our case advocacy supervisor felt that Justin and his siblings had experienced enough trauma living with a mentally ill parent and being separated from their family unit – they should feel safe and well treated. We believe that children in foster care should be well cared for and free from worry about basics like good hygiene and adequate clothing. As Justin transitions to his new placement, our Voices for Children case advocacy supervisor will continue to monitor and advocate for his best interests.

Be Part of the Difference

History shows that Voices for Children makes a difference in the lives of the most vulnerable among us. By getting involved and showing your support in various ways, as the Berges Family Foundation has, you can help be a voice for children in foster care and help them have a chance for a better future. They can’t be their own advocates – that’s our mission. Won’t you be a part of the difference?